DANIELA COSTA celebrated her first anniversary as editor of GAY VEGAS in the publication’s April/May 2016 issue.

GEORGIA VOICE, based in Atlanta, celebrated its sixth anniversary with its March 4, 2016, issue.

GO! MAGAZINE, based in New York City, entered its 15th year of publication with its April 2016 issue.

THE INTERNATIONAL GAY AND LESBIAN TRAVEL ASSOCIATION (IGLTA) named JUAN JULIA, the founder and owner of Axel Hotels, as its new board chair during its recent meeting in Cape Town, South Africa. Julia, who is based in Barcelona, Spain, is the first European to lead IGLTA since 2006.

METROSOURCE, based in New York City, entered its 37th year of publication with its February/March 2016 issue.

THE NATIONAL LESBIAN AND GAY JOURNALISTS ASSOCIATION (NLGJA) announced that SACHELLE BROOKS is the new Administrative Assistant at its Washington, D.C., head office. Brooks first served as the Communications Intern for NLGJA through a program with The Washington Center.

OUTFRONT, based in Denver, entered its 40th year of publication with its April 6, 2016, issue.

PQ MONTHLY, based in Portland, Oregon, entered its fourth year of publication with its January/February 2016 issue.

SEATTLE GAY NEWS entered its 44th year of publication with its January 1, 2016, issue.

TRANSITIONS AND MILESTONES
Volume 18
Issue 2
Posted by Fred Kuhr at 9:45 PM No comments:

A first-of-its-kind new guide to business travel is out now thanks to publisher ManAboutWord and presented by Marriott International, IBM, and the National Gay & Lesbian Chamber of Commerce (NGLCC).

This is good news for LGBT travelers who may count on expert resources to guide them on ways to stay safe, productive, and successful when navigating unfamiliar and uncertain destinations. These resources can now be found in a new mobile, interactive publication called The LGBT Guide to Business Travel. 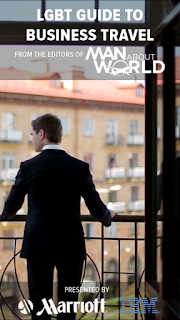 Billy Kolber, co-founder of ManAboutWorld and editorial director for the new Guide, said in a press statement, “Our aim has always been to shrink the world and make it a more welcoming and accepting place for all LGBT people, including those who travel for work. This innovative guide is our promise to business travelers that they can achieve their goals — wherever the road leads them — by also being safe, connected, and engaged with local cultures in ways that are socially and culturally smart.”

ManAboutWorld is a travel magazine for gay men that also appears in mobile guides. It is one of the only mobile-first magazines.

Stacey Milne, vice president of Portfolio Marketing Strategy and Planning at Marriott International, said in a statement, “We are proud to know that so many LGBT guests come to our hotels wherever their assignments take them. Our promise is to ensure their stays make them feel equally and warmly welcomed whether in Atlanta or Zurich. This practical resource, which includes many tips from our own Marriott associates, is one more way of making their travels as successful as we can.”

IBM’s Tony Tenicela, Global Leader and Managing Business Development Executive for Workforce Diversity and LGBT Markets, added, “IBM takes deep pride in supporting this education initiative. We feel like pioneers, too, over decades building global ventures and business opportunities that open doors for all including our LGBT colleagues, clients, and partners. The new LGBT Guide builds on this trusted foundation.”

And Justin Nelson, NGLCC co-founder and president, said, “LGBT entrepreneurs are helping to build a truly global economy through their hard work and creativity. That’s why we also are helping open new chambers around the world that connect multinationals with LGBT business owners.”

As LGBT professionals pursue their ambitions, global travel today offers greater career rewards, as well as a degree of risk. While the United States and many other countries are making real progress to achieve LGBT equality and inclusion under law, the fact is that more than 76 countries today still criminalize homosexuality.

While gay leisure travel has long flourished around the world, and spawned many popular guidebooks, this is the first time that a comprehensive tool has been created that serves LGBT employees and entrepreneurs, whose business can take them to places where they face challenges and risks because of their sexuality or gender expression. The LGBT Guide to Business Travel helps address questions and concerns such as:

•  “Am I at risk simply because I’m gay?”
•  “Should I discuss my trip with HR?”
•  “Can I bring my HIV meds with me?”
•  “How do I change the subject when colleagues ask about my family?”
•  “How can I connect with the locals without putting myself or them at risk?”

These questions and dozens more are addressed with a wide range of resources. From the U.S. State Department to Scruff, the Guide connects travelers with up-to-date information about laws, cultural customs, business etiquette, and real-world best practices from seasoned global travelers.


The Guide’s key topics include safety and security, resources and LGBT business etiquette, while also offering technical advice for staying connected to home, connecting with LGBT locals, and special tips for small businesses — all helping LGBT business owners access some of the travel perks often reserved for employees of large corporations. The Guide also offers suggestions for ways LGBT travelers can help advance the cause of human rights globally.

A new digital archive is making LGBT history accessible to students and faculty at colleges and universities all over the country, in addition to public libraries in major cities such as New York and Seattle.

The first phase covers gay history and culture since 1940 and already comprises about 1.5 million pages of searchable content.

The archive spotlights the experiences of not just the LGBT community as a whole, but of individuals of different races, ethnicities, ages, religions, political orientations, and geographical locations that constitute the community.

Under the title the Archives of Human Sexuality and Identity, the company has partnered with the New York Public Library, the Canadian Lesbian and Gay Archives, the Lesbian Herstory Archives, and other collection-holders around the country.

Historical records of political and social organizations founded by LGBT individuals are featured, as well as publications by and for lesbians and gays, and extensive coverage of governmental responses to the AIDS crisis.

The archive features materials from the Gay, Lesbian, Bisexual, Transgender Historical Society, in addition to activist groups such as the spiritually oriented Q Spirit forum and the Southern California Council on Religion.

The archive includes records of the Gay Activists Alliance, an organization founded after 1969’s Stonewall Riots, and ACT UP, a group founded in 1987 in response to the AIDS crisis. The archive also contains extensive records of the largest British LGBT rights groups during the 1970s, the Committee for Homosexual Equality in England and the Scottish Minorities Group in Scotland.

Collections from the Lesbian Herstory Archives include mainstream and alternative publications from 1970 to 2008.
The archive also contains personal correspondence and interviews with numerous LGBT individuals. The archive includes gay and lesbian newspapers from more than 35 countries as well as reports, policy statements, and other documents related to gay rights and health, including the worldwide impact of AIDS, materials tracing LGBT activism in Britain from 1950 through 1980, and more.

The archive also encompasses extensive materials related to feminism, women’s rights, and women’s concerns. The Phyllis Lyon and Del Martin: Beyond the Daughters of Bilitis Collection, for example, includes documents related to Lyon and Martin’s groundbreaking book on domestic violence and their work with the National Organization for Women (NOW).

The second part of the archive, which is due for completion in March 2017, will cover LGBT history from the 17th century.

“We have millions and millions of pages,” Mason added. “We have a group of advisors, academics, and librarians who are giving us lots of great input.”

A former Dallas Voice photographer, Christian (alias Christopher) Colbert, wanted in the murder of his former next-door neighbor Ronald Shumway, has been indicted by a Dallas County grand jury.

Having fled to Los Angeles, Colbert confessed to the murder in March. An extradition hearing was set for  May 18.

“Shumway’s torso was found in the yard of his former home last September when a new owner was clearing the backyard. The body was identified through DNA tests,” according to Dallas Voice reporter David Taffet in news story. “After Shumway resigned by email from his position as a DART [Dallas Area Rapid Transit] bus driver, his house was put up for sale. Colbert has been identified as the person who appeared at the closing. When asked for ID, he said he left his driver’s license home and would fax it later. He faxed Shumway’s license with Colbert’s picture replacing Shumway’s.”

“Colbert was a Dallas Voice Scene photographer around 2003-2006. He also was a hair stylist. In 2008, he created a product to prevent bleach and hair from ruining a person’s makeup,” according to Dallas Voice reporting.

Over the telephone, Taffet provided additional information. “The local Advocate [newspaper in Oak Cliff], where the crime took place, broke the story about finding a body in this yard and the sale was not done by this guy, Shumway,” he said.

Dallas Voice was interested in the story because Shumway was gay, Taffet said.

Taffet worked with Dallas police. Initially, the police thought Shumway had killed somebody and then disappeared. Oddly enough, no one had reported Shumway missing, Taffet explained.

“Where we helped break the case — when the police decided it was Colbert who had done it —  was when someone had heard from him in December and even sent pictures of where he was living,” Taffet said. “We got the phone number to police. They were able to determine the call had come from Los Angeles. We also sent the pictures to the L.A. Police Department. They picked up Colbert in a few days.”

Oddly enough, “Dallas Police went out to interview Colbert, and he admitted to killing Shumway,” although, “he is claiming self-defense” Taffet said.

The Dallas Morning News filled in some other details from a crime blog, dated March 14:

“On September 24, 2015, Dallas Police responded to 725 N. Winnetka regarding the unidentified remains in the backyard of a vacant home under renovation. During the course of the investigation, DNA comparisons revealed that the remains belonged to the registered homeowner Ronald David Shumway, W/M 57. The investigation also revealed that Christopher Brian Colbert W/M 08-21-1972 assumed Shumway’s identity and committed several deceptive acts. Colbert is currently wanted for Tampering with Governmental Record, Securing Execution of Document by Deception and Money Laundering, each carrying a $100,000.00 bond.…

“Shumway was last seen on April 23, 2016. Facebook posts that police believe were made by Colbert indicated he was going to Austin. Several posts were made to indicate he was living in Austin with someone he met online. In May, Shumway’s house was put up for sale and it sold in June. During the summer it was flipped. The current owner found the torso in his yard in September.”