CAMP, based in Kansas City, Mo., entered its 15th year of publication with its February 2018 issue.

FENUXE, based in Atlanta, entered its ninth year of publication with its January 12, 2018, issue.

GOLIATH ATLANTA entered its fourth year of publication with its February 2018 issue.

THE FIGHT, based in Los Angeles, celebrated its seventh anniversary with its February 2018 issue.

LETTERS FROM CAMP REHOBOTH, based in Rehoboth Beach, Del., entered its 28th year of publication with its January 26, 2018, issue.

THE MIRROR, based in Wilton Manors, Fla., entered its seventh year of publication with its January 2018 issue.

OUT IN JERSEY, based in Trenton, N.J., entered its 23rd year of publication with its February/March 2018 issue.

OUTSMART MAGAZINE, based in Houston, entered its 25th year of publication with its February 2018 issue.

SOUTH FLORIDA GAY NEWS, also known as SFGN and based in Wilton Manors, Fla., celebrated its eighth anniversary in its January 24, 2018, issue.

BOB SMITH, author and standup comic, passed away on January 20, 2018, after living with ALS for 11 years. He was the first out gay standup comic to have his own HBO special and to appear on “The Tonight Show.” He was 59.

TAGG, based in Washington, D.C., entered its seventh year of publication with its January/February 2018 issue.


THE WASHINGTON BLADE and the DC Brau Brewing Company have teamed up again on a specially branded can of Brau Pils for this summer’s Pride celebration. Readers were invited to submit their original designs for consideration to the Blade for a limited-edition “Pride Pils” can. Proceeds from the sale of the special cans will benefit SMYAL and the Washington Blade Foundation.

TRANSITIONS AND MILESTONES
Volume 19
Issue 12
Posted by Fred Kuhr at 7:26 AM No comments:

More pubs adding “queer” and “LGBTQ” to their lexicon

Many, but not all, LGBT publications have embraced the term “queer” and added the “Q” in “LGBTQ” when describing the community in their news coverage.

In an August 2017 editorial, OutSmart Magazine in Houston explained its use of the new terminology.

“The ‘Q’ stands for ‘queer’ or ‘questioning,’ and the change reflects our effort to be more inclusive of the entire community,” wrote editor John Wright.

As Wright points out, according to Community Marketing’s 11th annual LGBTQ Survey released in July of last year, 24 percent of millennials now identify as “queer,” as do 37 percent of “gender expansive” people. The survey also found that “LGBTQ” is now preferred over “LGBT” among millennials, and that, for the first time, the expanded abbreviation has an approval rating among baby boomers of more than 50 percent.

Based on its findings, Community Marketing concluded that “LGBTQ” is “a positive word for corporations to use today, with little negative downside.”

“Indeed, even some mainstream publications, including the Los Angeles Times, have switched from ‘LGBT’ to ‘LGBTQ,'” Wright noted.

Ryan Howe, editor of Out Front Colorado in Denver, wrote a letter from the editor last month explaining “why we use ‘queer’ alongside ‘LGBTQ.’”

“Out Front’s staff spent many meeting and arguments on whether to use the word in our magazine,” he wrote. “… Ultimately, we settled on using ‘queer’ when both the writer and the subject of the story agree with it. … For us, ‘queer’ is used as an umbrella term for anyone who identifies as LGBTQ or something other than the worldview that promotes heterosexuality as the norm.”

Troy Masters, editor of the Los Angeles Blade, said he’s “always been a fan of the word ‘queer’ because of its breadth of meaning. Today it refers to the increasing visibility of gender queer and gender fluid people or fluid sexual identity.”

Masters said the use of “LGBTQ” is a reflection of changing times.
“As we embrace diversity it just makes sense that we become inclusive about the term we adopt to describe ourselves collectively.”

“We use ‘LGBTQ’ and the word ‘queer’ regularly in our content and have done that for several years,” added Cynthia Laird, news editor for the Bay Area Reporter in San Francisco. “The main reason is that's how more people we talk to identify. LGBTQ has also been embraced by various nonprofit organizations, so we honor that as well.”

“We use ‘LGBTQ,’ and we will use ‘queer' when subjects identify that way,” noted Kevin Naff, editor of the Washington Blade.

Some publications choose not to use LGBTQ in their reporting.

“Our style is not to include the ‘Q’ as a general rule,” said Tammye Nash, managing editor of the Dallas Voice. “We certainly include the ‘Q’ when we are quoting someone, when it is part of the actual name of an organization or event, and there are some occasions when one of our writers includes the ‘Q’ for some other specific reason.”

Nash cited another reason for the publication’s decision.

“We have no particular objection to the ‘Q,’ and we do understand the element of inclusion. It’s just that the use of the initials ‘LGBT’ is intended to save space and time, and as more and more letters are added, it becomes increasingly clunky and, at least in my mind, a bit pretentious.”

The Los Angeles Blade plans to expand its coverage by publishing a weekly print edition, just one year after its biweekly debut.

The publication covers Los Angeles and California mixed with national and international coverage from the reporting team of its sister newspaper, the Washington Blade.

“After a successful first year on a biweekly print schedule, we determined that Los Angeles needs and deserves even more robust coverage of LGBTQ issues,” said publisher and editor Troy Masters. “To that end, we’re excited to deliver the Blade each week starting May 4.”

In addition to the expansion, the Los Angeles Blade announced it has hired media veteran Michael Jortner as its new advertising and marketing director. Jortner served as principal of WeHo Digital, a digital marketing agency serving small businesses in the area. Jortner is certified in digital marketing solutions by Gannett and MarketMotive.

“I’m a big believer in LGBTQ media and thrilled to join the Blade team,” said Jortner. “I look forward to working with Los Angeles businesses to reach and connect with LGBTQ consumers.”

The first weekly edition of 20,000 copies will debut May 4 at L.A. area bars, restaurants, gyms and other locations popular with area LGBT residents.

A new exhibition will highlight the history and diversity of LGBT and queer publications produced in Northern California from the 1940s through the 2000s. "Empowerment in Print: LGBTQ Activism, Pride and Lust " draws on the collection of more than 5,000 periodical titles preserved in the archives of the San Francisco-based GLBT Historical Society.

"From sober to sleek, from coy to explicit, from apolitical to militant, these publications demonstrate some of the myriad ways LGBTQ people have found empowerment in print," according to co-curators Joanna Black and Jeremy Prince. "The exhibition celebrates the important role San Francisco and our wider region have played in the creation of queer periodicals." 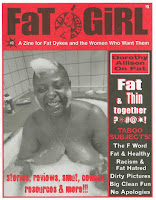 With one title on display for each letter of the alphabet, the show  looks to reflect “queer people from diverse communities using periodicals to form social networks, create culture, express desire and inspire activism.” The publications in the exhibit — many of them graphic — “offer a distinctive window into the intersectional identities, culture and politics of LGBTQ people at the high point of print periodicals as a means of mass communication.”

The exhibit starts with scarce private newsletters from the 1940s, when homosexuality was the object of legal and social persecution. It also displays pioneering American homophile movement journals from the 1950s, noting that the U.S. Supreme Court overtuned the ban on mailing periodicals defending homosexual people 60 years ago this year.

The show then offers a selection of the periodicals that emerged as the movement grew in size and force and as commercial publications reached paying subscribers in the 1960s and 1970s. The periodicals on display also suggest the array of issues represented in publications from the 1980s into the 2000s and some of the ways that zine-makers have created alternatives to mainstream LGBT publications.

"Empowerment in Print" runs through May 21, 2018, at the GLBT History Museum, 4127 18th St., San Francisco. For more information, visit www.glbthistory.org.

PPQ: What feature or features of ION Arizona have been the most popular with readers? 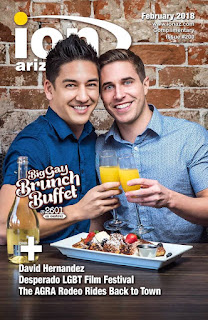 Tesorero:  I moved from Detroit, fell in love with Arizona and felt the national press never gave Arizona the credit it deserved. Phoenix is now the fifth latest city in the country. The original name was Eye on Arizona —  taken from a show on The Simpsons called “Eye on Springfield” — but it was shortened to IONAZ on the premier issue, then since people where trying to pronounce IONAZ phonetically (badly), we changed it to ION Arizona.

Tesorero: Competition. When ION started, there were only two publications, both news/politics/health/opinion. We were all entertainment/lifestyle. Since 2001, there have been more than 10 publications which have come and gone. Competition drove advertising prices down. Now that there are only two left, the print media is definitely different with competition on many fronts, including social media.

PPQ: What challenge or challenges is ION Arizona facing now?

Tesorero: In order to stay competitive and profitable, we offer social media marketing packages, sometimes without an ad buy. Also, another source of income is our signature events. We host epic pool parties, a sexiest bartender fundraising contest and an LGBT Oktoberfest. We also work with local promoters and non-profits to host smaller events at local businesses.

PPQ: How has ION Arizona changed since it was first launched?

Tesorero: When we started we were 48 pages, black and white with a color cover wrap. Back then, Abercrombie & Fitch Magazine was all black and white. We had 65 locations and we were not online. Today, we are 100-132 pages, all color, perfect bound, soft touch cover with 200-plus physical locations and available online everywhere.

Tesorero: Eliminate competition. Phoenix is a big city but doesn’t need two monthly magazines, one sports magazine, a regional publication and an annual directory. Advertisers are forced to choose where to spend their money in the LGBTQ community, so everyone struggles. Plus, we are all under attack by social media and the trend to move away from traditional media.

PPQ: What's the most surprising feedback you've received from a reader?

Tesorero: Just recently, a closeted TV reporter from our local NBC affiliate was featured on our cover. He used ION to “come out” and he said it was the best experience ever and he has never been happier. He proceeded to tell this story to the entire HRC Gala last week.

PPQ: What advice would you give to anyone who may want to launch their own LGBT publication?

Tesorero: Invest the money that you would’ve spent starting a magazine in an aggressive mutual fund. That is not a joke. I sold my Apple stock in 2001 to start the magazine. It’s worth over $1 million today.

PPQ: There have been a number of gay publications which have either downsized their staffs or ceased operations completely. Can anything be done to reverse this trend?

Tesorero: As I said before, diversification is the key for publishing survival. Of course, cutting costs is the easiest way to save money, but without income it’s irrelevant. Make money with ads, online ads, social media, graphic design, photography and events. Don’t rely on print ads for 100 percent of your income and survival.

PRESSING QUESTIONS
Volume 19
Issue 12
Posted by Fred Kuhr at 7:11 AM No comments: